A GUN FOR GEORGE VHS

Get ready, salads. A Gun For George, director Matthew Holness’ 2011 short film based on the life of the titanic Terry Finch, is launched today in a special ‘limited edition’ VHS collectors pack. Released by Celluloid Apocalypse, “specialists in analogue sleaze, cult and genre cinema,” Warp Films’ A Gun For George is now available in an extremely limited edition of 50 copies.

If that fact alone doesn’t give you the sweats, this will. The release also includes a facsimile reprint of Finchland Fanzine No.19, first published by yours truly way back in July 1979. This issue, deemed a fanzine ‘classic’ by Finch fans, features an ultra-rare never-before-published Terry Finch short story. Previously withdrawn from sale by its original publisher, ‘TOWER BLOCK’ is a gritty, violent Reprisalizer classic. Only ever available in the original issue, (eighteen copies sold), its inclusion in this historic VHS release constitutes the story’s first ‘official’ publication worldwide and is therefore major news for Finch diehards.

Then there’s the rest. Have a gander below to see what you get. Remember, this release is extremely limited. 50 copies only, so order now to avoid disappointment! You in? Then here’s the link, son: 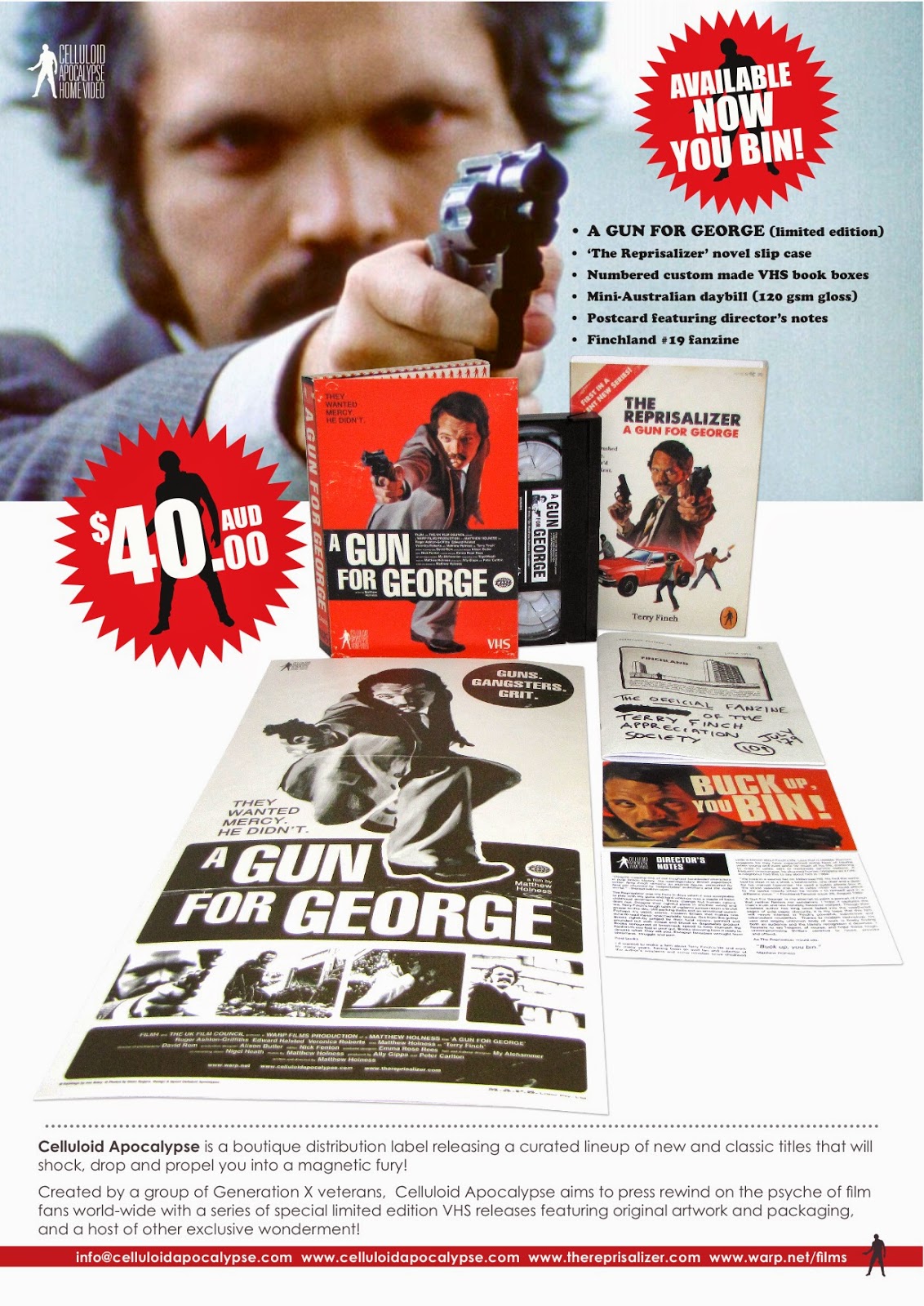 ‘The road had been long and hard, and he’d tried his best to walk it with George to its end. But the path had snaked and twisted around them, and they’d met with men who charmed and smiled and robbed them into a gutter they could never climb out of. And when Shuter had managed to free his own shattered mind from the darkness enveloping it, grasped desperately for what little sanity his aggressors might have missed, he saw George, broken for good, far down below him in the shadows and the grime, and he knew despair.’
I, The Fury, 1977

As I write this, the M2 motorway in Kent is closed due to a vast 15ft-deep sinkhole opening up between junction 5 near Sittingbourne and junction 6 near Faversham. Like most Finch fans, my immediate thought was whether or not they'd find George at the bottom. The metaphorical pit in which Shuter must leave the tormented soul of his murdered sibling is, of course, pure fiction, yet in the brutal world of Terry Finch's pulp vigilante novelettes, the M2 is where The Reprisalizer first hunts; a bleak stretch of crumbling, concrete motorway where Bob Shuter slowly and inexorably tracks down his brother's killers.
This strange occurrence of life imitating art, for Finch fans at least, is testimony to the raw, prescient power of the author's infamous pulp crime paperbacks.  I, The Fury, published in a limited run for local newsagents way back in 1977, captured a nation in its death throes. A country in crisis, succumbing to ruthless takeover by psychopathic business magnates and corrupt, corporate combines. A wasteland where the sordid, brutal killing of a humble British worker by gangsters in a deserted warehouse near Sittingbourne could go unseen and unpunished.
But not unavenged.
Much has changed since The Reprisalizer's heyday, but human nature remains the same. Police will always have bad apples. Money always talks. And a thirst for vengeance always surfaces with any miscarriage of justice. Rightly or wrongly, Finch used this 'nowhere land' of the motorway as his figurative Wild West; a relatively empty (then at least) expanse of uninterrupted asphalt and tarmac, stretching for miles through a vast, industrial wasteground in which Finch's larger-than-life villains, lawmen and troubled vigilante could battle it out unchallenged by lawyers or courts. Or, in the parlance of '70s serial vigilante fiction, the proverbial red tape.
‘Shuter hit sixty on the slip road and rejoined the motorway, slamming his foot down hard on the accelerator. He wrestled the Allegro into fourth, veered wildly across the carriageway into the fast lane without indicating and tore ahead of the two motionless lorries halted close behind. He checked his rearview mirror. Both vehicles had braked evenly on either lane, unable to swerve for fear of ramming each other’s wheels. What was left of the lawyer adorned their front grilles and the thin space between their rear trailers…’

In such a heightened imaginative environment, of course, artistic license still reigns. I, The Fury, while set along the uncompleted M2 of '77, still jumps geographically to serve its story, but that's pulp, sunshine. And though the names are changed, it's not hard to spot the elevated bridge restaurant at Farthing Corner Services (now Medway Services), the Stockbury Valley Viaduct, Maidstone multi-storey car park (demolished last year) and Sittingbourne's historic Paper Mill (demolished in 2010-11, soon to be replaced by a superstore and housing development).
Like his greatest creation, Finch was as an eternal outsider. Unknown and unread beyond a small yet loyal readership of similarly anguished souls, he wrote primarily for himself, hammering out novelette after novelette for little money and even less acclaim. Nevertheless, Finch's violent imagination remained largely unshackled by the constraints of 'respectable' publishing. Thus his books were - and are - brutal kicks in the collective gut. The stories concern themselves with victims, speaking of injustice, pain and casual torment; lives lived in the gutter.
No wonder they're popular today.
Larger than life, perhaps, but then who would ever have thought a sinkhole could open up halfway along the M2?

I, The Fury will be published as an ebook this Spring.

Despite creating two of the toughest, hard-boiled characters in pulp fiction history and braining a man in a public library, the writer Terry Finch remains an elusive figure, venerated by fans yet shunned by ‘respectable’ publishers and the wider world (which, if you’ve read just one Finch in your life, you will recognise as a distinctly cruel and unforgiving place, especially Thanet). One of Britain’s foremost exponents of British noir and the British western, little is known about Finch himself bar his facial features, which adorn the lurid covers of practically every book he wrote from 1970 onwards - a contractual obligation imposed by the writer himself, often in lieu of payment.

For most of us, whether we are aware of it or not, Finch’s man-in-the-street looks personify the simple yet tortured and all-too-often brutalised characters he wrote about. Balding, overweight, moustachioed - Finch’s natural imperfections, not to mention his dress sense, enrich our understanding of his fictional underdogs. Like his prose style, flaws and shortcomings are worn on the sleeve (usually brown pinstripe) - strength is sought in the mundane, blemishes borne as badges of honour. War trails for the working man, even if Finch himself never quite earned a working wage. For his loyal readers, predominantly single men of a depressed and volatile disposition, ie long distance lorry drivers, Finch, and by extension us, was Draw - was The Reprisalizer. Who, then, was Finch?

www.thereprisalizer.com is my attempt to answer that question and spearhead the long-awaited Finch revival. An avid fan and collector of the author's westerns and crime novellas since my early teens, I have proudly (and loudly) trumpeted Terry’s work ever since, and for many years worked alone (and unpaid) as founder and President of the Terry Finch Appreciation Society. Now, thanks to the worldwide web, Finch's vast, obscure and largely unknown body of work can finally find both the audience and literary respect it deserves. Though their troubled author has long since disappeared into the crumbling pages of pulp paper obscurity, it is my hope that this website will revive interest in Finch's powerful, subversive and ultra-violent thrillers.

I've scanned in several images from 'Buck Up!' (a celebratory 'guide' to Terry's Reprisalizer books published way back in 1979, to which I contributed the foreword) on the website and over the coming months plan to make more of Finch’s work available online so please watch this space, follow this blog and my Twitter feed, and join the Terry Finch Appreciation Society (now completely free!) for regular news and updates (go to the site and hit Contact).

The revival-ution starts here. In the ruin of today's political, social and economic climate, Britain needs a fistful of hard, no-nonsense, tough-talking, tall-walking Truth, courtesy of Mister Bastard. Welcome back, Bob ‘Powder Keg’ Shuter - we've missed you. Now more than ever, the oppressed, the uptight, the angry and the lonely need a good, hard bout of Rough Justice and Brute Force.

Watch out, delinquents... THE REPRISALIZER'S BACK!